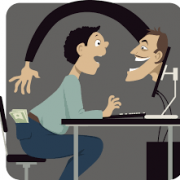 PSI filed for Chapter 7 Bankruptcy relief on May 15, 2015 in Case No. 15-31649-jal. The Bankruptcy Court entered a final order and decree in the case on November 18, 2015, which officially ended PSI as an ongoing business. PSI was administratively dissolved on October 1, 2016, which was the final nail in its coffin. Yet PSI continues to appear on consumer credit reports. Why?

On credit reports, PSI lists its name address and phone number as:

This is the same address and phone number as the Louisville Recovery Services, LLC. So it appears that Louisville Recovery has cloaked itself in the dead husk of PSI and is using PSI’s subscriber agreements to report negative credit information to one of more Consumer Credit Reporting Agencies.

Like PSI, Louisville Recovery adds usurious interest and/or fees to medical debts that neither Louisville Recovery has a legal right to recover from the consumer. See Grace v. LVNV Funding, Inc., 22 F. Supp. 3d 700 (W.D. Ky. 2014) (holding that PSI could not recovery usurious 18% interest disguised a service charge from the plaintiff).

If PSI is on your credit report, please call or email us for a free consultation. We can help.

Garnishment and Bankruptcy
Scroll to top