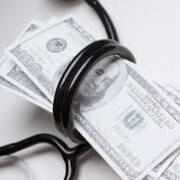 Our friends at Nerd Wallet have a nice article weighing the negativities of cred card debt to medical debt against each other. The article notes that credit card debt is more predictable and negotiable, at least as to rates. These observations relate to the fact that you are in control of incurring credit card and the debt is voluntary, whereas medical debt arises out of medical treatment which is by and large unpredictable, unplanned, and out of your control But credit card debt also accumulates interest and drags down your score more.  The article also notes that hospitals often have programs for reducing fees and negotiating lesser amounts. Of great interest is this observation:

NerdWallet Health has found that Americans pay three times more in third-party collections of medical debt each year than they pay for bank and credit card debt combined. In 2014, roughly one in five American adults will be contacted by a debt collection agency about medical bills, but they may be overpaying – NerdWallet found rampant hospital billing errors resulting in overcharges of up to 26%.

Paying three times more in medical debt to collectors than payments to banks and on credit card debt combined is a staggering fact. How can the economy move forward when staying healthy in drowning us in debt?