Here are some recent stories I found interesting that intersect with practice:

ID Theft is on the Rise

The FTC received 490,000 Identity Theft complaints in 2015. This represents a “47 percent increase over the prior year, and the Department of Justice estimates that 17.6 million Americans were victims of identity theft in 2014.” 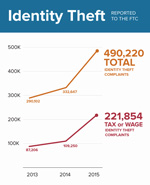 According to IDT911, here are three types of Identity Theft that College Students are particularly vulnerable to:

Nearly three-fourths of high net worth investors are worried about identity theft, ranking it higher than terrorism (65 percent) or a major illness (56 percent), according to a new Morgan Stanley Investor Pulse Poll.

Tweets by @LawsonatLaw
Has Unifund Garnished you? We can help you fight back.

Turning the Tables on Debt Buyers—Using Arbitration as a Defense to a Collection...
Scroll to top