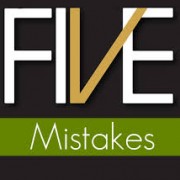 Don’t make these mistakes when disputing errors on your credit report. These tips come from a great article on CreditCards.com

This is completely counterintuitive. The Fair Credit Reporting Act (“FCRA”) gives you the right to directly dispute debts with the entity that is reporting false credit information about you (the “furnisher” within the meaning of the FCRA). The FCRA imposes specific duties on a Furnisher when it receives a dispute from you, the consumer. But the FCRA does not provide any remedies for a consumer against a Furnisher that breaches its duties. That is, you can’t sue a Furnisher for failing to correct errors in connection with a direct dispute. Rather, the FCRA only allows you to sue a Furnisher concerning false information if you first dispute the false credit information with a consumer credit reporting agency (“CRA”), i.e. Equifax, Experian, and Trans Union.

You also can’t sue a creditor or credit bureau based solely on the inaccuracies in your report, she says. “Most people do not realize that it is not illegal for a credit bureau to report inaccurate information,” says Joy. “A claim arises only if the credit bureau or furnisher fails to properly investigate a dispute.”

Arbitration is plague on the exercise of consumer rights, the scope of which is way outside this article. But you should be aware, that when you purchase a consumer credit report from a CRA, the CRA’s website will contain terms that require you to arbitrate any claims you have against the CRA bases on the credit report. You may unwittingly agree to forced arbitration of your claims and thereby forever waive your right to sue in court.

“Forced arbitration clauses never help the consumer,” says Cary Flitter, a consumer lawyer and law professor in Philadelphia. “They only help the business that does something wrong.”

Look for the terms and send the CRA an opt-out letter rejecting forced arbitration. Most likely, the letter needs to be sent within 30 days of obtaining your credit report.

In my experience, a lawsuit is often the only way to get the attention of a CRA or Furnisher of false negative credit information. (You can assume I’m a bit biased, because my practice includes suing CRA’s and Furnishers.) But in order to sue and receive damages, you must be able to document your dispute and damages. As explained in the article:

In numerous court cases reviewed by CreditCards.com, many people lost their chance to argue their case before a jury because they did not save enough evidence that could be used in court to prove they had been wronged. Instead, their case was moved to summary judgment at the request of the credit bureau or the furnisher of the information, causing it to be decided by a judge rather than at a trial by jury.

In order to get a case past summary judgment and get a jury to hear your complaint — which gives you the best possible chance of winning your case — you will have to produce evidence showing there’s factual disagreement about what happened to your dispute and how you suffered as a result.

That includes saving documents, such as a certified mail receipt, that shows the credit bureau received your dispute. “The big three consistently lose or claim to lose consumer correspondence,” says Leonard Bennett, a consumer lawyer based in Newport News, Va. It also includes saving all of your financial paperwork, including any denials of credit that you have received. “Those denial of credit letters are proof a consumer may have been harmed by credit report errors,” says Joy.

As explained in the article:

When disputing credit report errors, most people opt for convenience and dispute online or by phone, says the CDIA’s Norm Magnuson. “About 54 percent of disputes are done on the telephone or Web,” he says. When people do mail a dispute, they rarely include a robust explanation of their complaint, he says. “Only 2 or 3 percent involve a free-form letter [that’s] a page or more,” says Magnuson.

The credit reporting agencies actively encourage this brevity by marketing on their websites how easy it is to use their online dispute systems, which often give you just enough room to briefly state your dispute. However, consumer lawyers say that using a form supplied by the credit bureau could cost you your case if you later need to take the credit bureau to court. “Never do credit report disputes online or on the small space on the credit report itself,” says Joy. Often, “there isn’t enough room to make full explanations,” she says.

That could hurt you later on if you have to sue the credit bureau for failing to properly investigate your dispute. You’ll need to be able to prove in court that you gave the credit bureau enough information to examine your case and conclude that the error is legitimate, say experts. Otherwise, “the credit reporting agency will uniformly respond with, ‘Not our fault, we didn’t have enough information,'” says consumer  lawyer Bennett.

Experts recommend you send a detailed letter to the credit bureaus that:

The credit bureau is unlikely to use the evidence to investigate your complaint. However, by including it with your letter (and making copies for your files), you are making it much harder for the credit bureau to later claim that the error is your fault because you didn’t send enough information, say consumer lawyers.

Similarly, experts recommend you send the lender connected to the error identical copies for the same reason.  Credit bureaus will forward any evidence you send with your dispute, including any additional letters you write explaining your dispute. But it may still be a good idea to send a separate letter to the furnisher, just in case.

“The reason why you want to send a copy of the letter is not because [the furnishers] are going to do a substantive investigation. They typically don’t,” says  Bennett. You want to send it so the furnishers can’t argue in court that the dispute they received was inadequate, he says.

Lenders and other data furnishers are currently under increased scrutiny from the Consumer Financial Protection Bureau for failing to thoroughly investigate consumer disputes. So the data furnisher may also have more incentive to properly investigate your dispute if you provide them with enough information to conclude that the information they’re furnishing is incorrect.

If you’d like more information for disputing errors on your credit report, PLEASE call or email me for a free consultation and credit report review.

Tweets by @LawsonatLaw
Medical Debt vs. Credit Card Debt: Which is Worse?

Tips for Increasing your Credit Score
Scroll to top